It was an American designer. John Rowland, who look the lines-of a dory, extended them. added a larger transom and a ballast keel and launched the first Mouette in 1959. A number were built in the States and they proved able and seaworthy little craft with a surprising turn of speed and good sea-keeping qualities. In 1972 an exhibit at the Earls Court Show was Eric The Red, undoubtedly a Mouette, but built by Don Ridler from odds and ends of scrap timber, bed sheets and bamboo for a total sum of £.160 and subsequently sailed across the Atlantic and back to UK. We didn't applaud Don Ridler's ramshackle boat but we did see the design as a possible way out for the home builder of limited means and we asked John Rowland for his blessing on our proposal to promote the boat in the  UK. 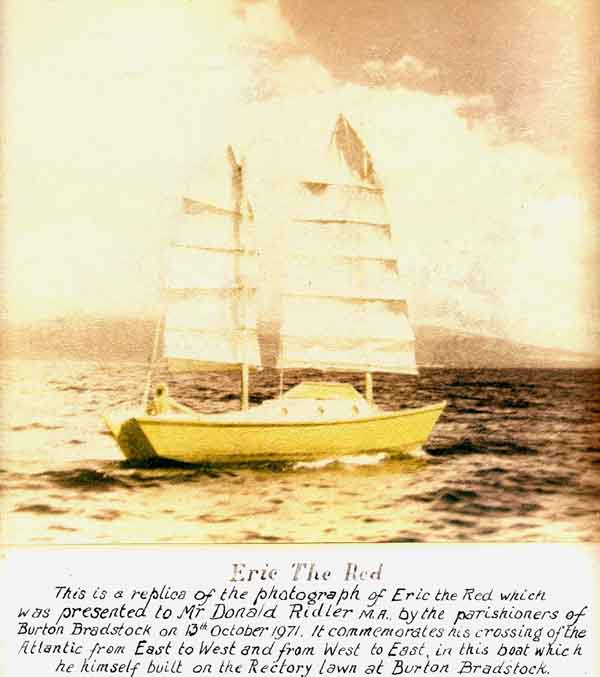 Until that time the only plans in existence were three very basic sheets giving lines, offsets and sail plan. We engaged a naval architect to draw up a complete set of working drawings. This done we looked around for a boat builder to produce a bare hull for us, and here we came unstuck. The lowest quote we could get for a bare hull and deck was over £l000 and our editorial budget wouldn't stand it. By chance we heard of a man 'who was building from the basic plans and we settled down to wait until his Mouette was built, rigged and sailing. He had a lot of interruptions and delays but, finally, on a wild wet day in late September I went aboard Ms Tan Blue at her moorings in the mouth of the Tees. The following is a sailing report.

WHEN you go out on a boat review you take whatever the weather hands out; this was the most daunting set of circumstances I had ever met. The forecast gave a S-SE Gale Force 8-10 imminent, the wind was already 20-25 knots, gusting in bitter rain squalls that blew grey and threatening on the smoke of the industrial Tees. Outside, the North Sea rolled in great lurching mounds of leaden water and rose smoking over the offshore reefs.

Tara Blue had only been under sail twice--both in Force 3 summer breezes, the engine was behaving a bit erratically, the tide was on full ebb and we had an unmarked channel across rocky ground to negotiate before we could reach more open water. On the credit side we had the shelter of the land and a reach out and back. Ordinarily, sense would have prevailed and we would have cancelled. I had travelled the length of England to sail the boat and I had to return next day. I was determined not to release Mouette plans until I had sailed the boat; we decided to be very very careful and make it quick--very quick.

The dory hull shape is totally different to anything I have experienced. At rest, her initial stability is low and a number of men moving around her decks will make her heel excessively. Using a clinometer and two men whose weight totalled 26 stone, both on the side deck by the shrouds, I measured 12-15 degrees but at that point she went no further. We set double reefed main and one headsail and made off along the narrow channel towards the open river mouth, aided by the engine, more for morale than because it was necessary.

Given wind and sea one can assess a boat quickly and as soon as she felt the wind clear of the headland and the scent of open water I began to feel confident. Using a sophisticated anemometer I recorded 20-25 knots apparent wind on the beam and an angle of heel of 20-25 degrees--convenient figures to remember. At that angle she seemed very stiff and I felt that a very great deal of wind would be needed to put her hard over.

Just in case I didn't tell you the news, then it might be of interest that Eric The Red/junk ketch version of Mouette (probably),  was wrecked in The Cape Verde Islands, 1977?, according to Annie Hill in the book "Voyaging On A Small Income", my edition is 1993...pge.42.

There is some slight doubt about it in the wording, but I suppose it is credible. The boat nearly made a circumnavigation. No news of the fate of the crew.

The site of Erik's building was the Dorset village of Burton Bradstock, and there is a village website with an interest in Eric etc.

A post script.  October 2015,  The Junk Rig Association have kindly allowed us to use a page from their site regarding Eric or Erik, (both spellings used.

Click here, 'Eric the Red', to go to the articl.