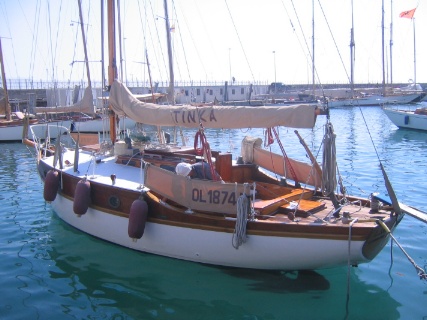 'Tinka' gleaming in the Italian sunshine!

The builders Plate from 'Tinka'

This is a line drawing of 'Sixpence', taken from 'Dream Ships by M.G.

Just a quick line to say that my father Bill Turton owned 'Sixpence' for many years. I can still remember travelling to the East Coast with my father to view the boat - it was painted an awful pale blue - everywhere!!


Based at the PMC (Penarth Motorboat and Sailing Club) in South Wales, Sixpence was raced very successfully, both crewed (sometimes by me) and single-handed for many years, and also took a large family on many fondly remembered holidays to Devon, Cornwall and the South Coast.


She was also entered in the AZAB (Azores and Back) race some years ago, sailed by Jack Taylor, also of the PMC. JAck's adventures in this race featured in an hour-long ITV programme which was available on video at one time.


My brothers and sisters all loved that boat, and were truly sad when she was sold. The last we heard was that she had been restored to her thirties splendour, and was moored somewhere in the Mediterranean. There was a sister ship 'Sequence' which also sailed from Cardiff at one point. She was almost identical except she lacked a bowsprit.


My father has many many photos of Sixpence, racing, cruising, or just holidaying. He also has many of MG's books, and once even met the great man at an Earls Court Boat Show.

Hello there, my name is Chris Keenan.

In 1985 I found 'Tinka' in Gosport and bought her as a mess and restored her in Benfleet Essex.  I was born in Leigh on sea and served my time at Johnson Jago sons,  as a shipwright, rigger, waterman. I sailed 'Tinka' to Sardinia in 88 where I lived aboard and ran a sailing school for the US Navy base there. Anybody wanting to know about Tinka should email me at meqd2 at sailmail.com or chriskeenan76 at yahoo.com and by the way Dave of 'Tewk' of Leigh on sea, I have a copy of the plans for Tinka, built at Stanilands 1951 of West African mahogany.. I now live and work in Venezuela , on my 45 ketch www.ladybella.com and make yacht service... so still boat building.

regards to all Chris Keenan

2015 update, Chris is in th4e west Indies at the moment and still sailing and selling boats.  see his website  www.cksailing.com

Chris Keenan again. I read here that someone says 'Tinka' and 'Sixpence' were identical. very wrong, they were very different. 'Tinka' was deepened at the time of construction. She drew 5'8" when I rebuilt her. MG was consulted and once he told me how he went up to oversee the making of the wedge shape keel extension they put in her. The mast was not altered. but the end product was a much stiffer yacht. Her ballast keel was 2.8 tons not 2.2 with 4'6" draft, as was 'Sixpence'. the owner of which came to see me one pm in Benfleet, he said he never had to wear his oilskins... 'Tinka' was heavier in the planking too.

regards to all Chris

Our thanks to Chris for the extra information! It was quite common for M.G. to heed the advice of owners and alter later builds from the same plan.  He always listened to the grass roots!

The new owner, Silvio,  has been good enough to send in pics of 'Tinka' and offer the plans to us so we may scan them and place them on CD for all!

Tinka participated in the Imperia meeting for classic sail boats in September 2006 and won the 2nd prize. I attach some pictures. I have registered to be a member of your Group,

You have to admit she is a real beauty!  We look forward to more pics of her soon!  John

March 2008, true to his word Silvio has sent in another batch of photos of this classic MG sailing in the Mediterranean.

These pictures really show the quality of fittings and finish!  However looking at the helmsman in the bottom left picture, (not sure if that is you or not Silvio), there seems to be a lot of helm,  for not a lot of angle of heel?

Silvio tells me that 'Tinka' won 2nd place in her class in the classic festival locally, I am not surprised.  She is a credit to you and the others who have cared for her.

2015 we have heard the sad news that she had sunk in harbour.  We are trying to contact Silvio to find out what happened, but so far no luck.